Just Do the Next Thing ~ God Has a Plan

1 About that time Caesar Augustus ordered a census to be taken throughout the Empire. 2 This was the first census when Quirinius was governor of Syria. 3 Everyone had to travel to his own ancestral hometown to be accounted for. 4 So Joseph went from the Galilean town of Nazareth up to Bethlehem in Judah, David's town, for the census. As a descendant of David, he had to go there. 5 He went with Mary, his fianc-e, who was pregnant.

6 While they were there, the time came for her to give birth. 7 She gave birth to a son, her firstborn. She wrapped him in a blanket and laid him in a manger, because there was no room in the hostel. 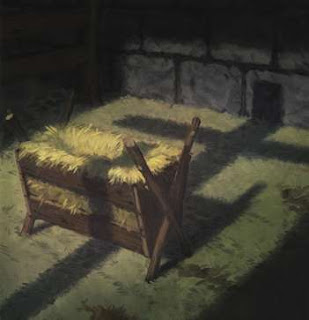 God's plan isn't always going to look like a well thought out, perfectly orchestrated journey.  At least not from our point of view as we begin taking the steps as He directs them.  Looking back, we can see how it WAS perfectly orchestrated and very well thought out, but we never go into with 20/20 hindsight vision.  The key is to not question His plan and just do it! Even when it doesn't make sense.

That, and do it with the right attitude.  God asks us to obey from the inside out.  Obedience with a grumbling heart is not pure, submitted obedience.

Mary's lesson today is just this ~ just do the next thing and do it without complaining.  As far as we can tell from scripture, Mary never complained or grumbled when she was faced with the following conditions of her journey:
I think back to the times I have been expecting and how I worked so hard to make it a perfect time so that we could enjoy the event and celebrate the joyous occassion with family and friends.  Oh the plans to make things just right.  This is what we do for the birth of our own children.  Think of the plans made to bring a person of royalty into this world.

Here is my imagined 'earthly' response one might have if they were called to bring the King of Kings into the world under the conditions described in Luke:
Of course, this is a 21st century version of a worldly 'imagined' response to the conditions of Christ's birth, but it makes me mindful of how I might be tempted to respond to what God calls me to do today, in the 21st century, with our presumed expectations of grandeur and notoriety when doing great work.

Despite the dreadful conditions of Christ's birth, God's will was carried out perfectly and God was perfectly glorified.  Not as we would have planned it but as He had planned it.  PERFECTLY.

So what about God's plan for us today?  Are we looking for perfectly laid out plans that make sense to us and have obvious 'God glorifying' results? Or are we simply submitting, doing the next obvious thing, without questioning the 'plan'?

Just do it.
Whatever God is calling you to, just do it.

Serving God may mean:
But we can be assured that no matter the conditions or circumstances our calling comes in or from, when we 'just do it' God will be glorified.

No grumbling.  Just do the next thing and see God's plan for you bring Him more glory than you could ever imagine.

Prayer:
Lord God, as I consider how Your will was played out in the birth of Christ, I am humbled.  How many times Lord, have I formulated great plans to bring You glory by doing this or that for You?  How many times have I miss stepped because I questioned the reasonability of the obvious next step and adjusted it to something that made much more sense in my mind?  Forgive me Lord for the times I have brought my worldly expectations to Your Godly plan.  Thank You Lord for never shutting the door and always giving me another opportunity to walk the path that brings me straight to You.  Forgive me Lord when I have grumbled and complained along the way.  Thank You Lord, for those hard walks down Your path that have drawn me closer and closer to You.  Lord, show me the next thing.  Give me eyes to see the next step.  Give me a heart that responds with obedience.  Lord, I want to just do the next thing for You and watch the Glory of Your will play out in my life.  I do not ask for 20/20 hindsight vision Lord.  There is more joy and peace in trusting you blindly than in seeing the beginning from the end.  Thank You Lord for the sacrifice of Your Son that allows me to walk in that peace and joy with You.  Amen.

SIGN UP FOR EMAIL NOTIFICATION WHEN NEW POSTS ARE PUBLISHED:

Enter a word, phrase, or scripture and search this blog...

Find a Topic that Speaks to You